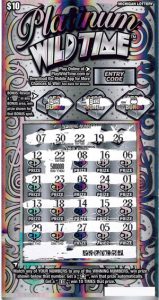 The lucky player, who chose to remain anonymous, bought her ticket at the Empire EZ Mart, located at 9988 West Front Street in Empire.

She scratched the ticket off as soon as she got in her car. Her lucky number was 22, which matched one of five winning numbers on her ticket and carried a $500000 prize.
“I almost passed out when I saw I won $500,000. I was so excited, I could barely drive home,” said the player.

This lucky player visited MI Lottery headquarters to claim her big prize. With her winnings, she plans to spruce her home with new furniture and update the flooring.

Michigan Lottery’s Platinum Wild Time instant game launched in October of 2017. Players have already won more than $35 million. Each ticket cost $10 for a chance to win prizes ranging from $10 up to $500,000.